When I was 14, we lost our dog Lady when she was hit by a car. We lived in the Snohomish house at this time, and Lady had moved with us from Carnation. She was my last emotional tie to the Carnation house, and losing her was letting go of that final connection. Lady was a yellow lab mix the size of a large beagle. She was stubborn and sweet. Mom brought her home as a puppy; a surprise for our family. She said they were giving away puppies in front of the grocery store. Dad was mad and told her to take it back. When she did, the people were gone. Dad said we could keep the dog, but if Mom ever did that again he would make her take it to the pound. He looked serious. Poor Lady quickly got pregnant with a litter of puppies from our other dog, Barney. At nine months she gave birth to eleven pups. She was so scared; not knowing what was happening. Together Mom and I took care of the puppies. I loved nurturing the puppies and watching them grow. When they were big enough, we put them in a basket and took them to a parade in town so they could find homes with anyone who wanted them. Mom and Dad got Lady spayed after that. Lady had a few bad habits: #1 she smiled. Smiling is cute and I absolutely love when dogs smile, but most people thought she was baring her teeth at them, so she got whacked in the face by a few strangers because of the smiling. #2 she was a stubborn escape artist. We couldn’t tie her or pen her up without her escaping. She loved to go on adventures and would always cross the busy street. In Carnation, all the neighbors knew her. If they saw her by the road, they would stop. She would smile, wag her tail, and cross the road in front of them. When we moved to Snohomish, she had no fear of cars, assuming they would get out of her way, and we lived just off of Highway 2.

Shortly after Lady died, Mom and Dad got me a dog. He was half Border Collie half Australian Shepherd. He was black, white, and brown (black tri) colored, and I called him Cooper. Cooper was the first dog that was considered mine, and he healed the wounds from losing Lady. My daily routine with Cooper would be to feed, brush, train, then play until dinner. Cooper was extremely smart and fast! It took him less than five seconds to run around the house (I counted). Cooper was the perfect dog for me. He was farm-smart and never strayed far from my side. He inspired me to work with animals. I wanted to be a veterinarian, so the summer I turned sixteen Mom and Dad let me volunteer at a veterinary office once a week. I was excited to work for the vet. Our library at school was very small, but I had read all the James Herriot books. I wanted to be a part of helping animals feel better when they were sick or hurt. My duties at the veterinary office included: walking dogs and collecting stool samples, holding animals, bathing dogs post-surgery, and cleaning. I was lucky to work for a veterinarian and techs who liked to teach me as well. They would let me compare slides to the chart on the wall while analyzing the samples. I got to view a hematoma surgery on a cat. I helped when five (of the worst) dogs were brought in from a fight over a bunny (the bunny got away). I even learned about how to tell when a turtle is dehydrated when a pet turtle was brought to the clinic. I loved working at the vet, as I found it very hard but rewarding work.

It was a weekday in early September. The familiar anxiety of another school year was weighing on my mind, as it was starting next week. Dad and a few other guys were working in the barn. I fed Cooper, brushed him, trained him a little, then let him go play. He was never out of sight for more than 15 minutes or so. I was going about my indoor chores when I realized that I hadn’t seen him in a while. How long had it been? An hour? I couldn’t remember. I started walking the property. I checked the woods, behind the barn, and even got brave enough to walk down the driveway and check the street. I didn’t find him. Dad saw me calling for Cooper. He told me that Cooper would show up and not to worry. When Dad came in for lunch I told him that I still couldn’t find Cooper. He told me that he would help me look after work. The day went on and the sun started sinking lower, along with my heart. I was getting really worried and upset. I wanted to talk to my Dad, but I didn’t want to show weakness in front of Ted, and I wasn’t sure that I wouldn’t cry if I went out there. I had stopped looking a few hours ago because the more time went by the more I was afraid of finding his body the same way I had found Lady. I didn’t want to be alone. I stayed in the house and willed the clock to move faster so the work day could be through and Dad would walk with me as promised. Finally, I see Dad walking in from the barn. My eyes scanned to the left, the field in front of the old house on the property. Then I see it, the black fur about twenty feet in front of the old house. I run out to meet Dad. “I think I see Cooper.” Dad walks with me through the field. There is my dog, laying on his side. He looks like he is mid-stride, giving the appearance of movement, even in death. At first, I analyzed. My mind took in the facts, I gathered from what I was seeing and from what the vet had taught me, that Cooper had most likely gotten into something poisonous. Yet, he had been so smart about staying away from dangerous liquids. Dad thinks he may have had a heart attack, which was also possible. Either way, my Cooper was gone. It slowly sinks in to my heart. My boy, my puppy, he was still so young and I had so many dreams for us. My companion and source of comfort and love, laying alone in the field and I couldn’t find him. I felt awful. Dad and I buried Cooper while the sun set behind us. As the shadows fell I let the tears fall. I couldn’t believe that Cooper would be out in the cold instead of warm at my feet that night. I didn’t know how to talk to Dad about what I was feeling, and I knew that I would have to tell Brother and Sister what happened. When we finally went in the house, I told them that Cooper was gone and we thought he ate poison. Then I made us all dinner.

My heart was broken and I was grieving for my special dog. Cooper had kept me moving forward, and was a good thing in my life. Without him I was feeling lost and empty. School started that week, and I was called into the office to talk to Pastor M. Everyone had seen how upset I was about Cooper. Although he had encouraged me to work at the vet, he now told me that it was a bad idea. I was obviously upset over the death of my dog. There was no way that I would be a good vet if I was going to be this upset every time an animal died. Euthanization was a service that veterinarians provide, and he didn’t think that I would be able to provide that service. I listened to him talk, and I had no fight. So I agreed to stop working at the vet; I let go of my dream.

Our family went on to have other dogs, but none were mine. I wouldn’t have another dog for seven years until Husband and I got our little dog, Sydney. I went on to have a successful career and business in grooming, and always studied animal health in order to help clients. I have felt fulfilled in my career with animals, but have often wondered and yearned for the life of a veterinarian. I am going in an artistic direction now, but Cooper will always have a part of my heart, and he will always have my dreams. 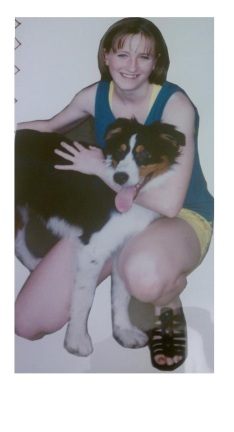 One thought on “Cooper”