My depression has affected me stronger in the last two weeks than it has in a long time. That’s the thing about depression; you will start to feel better until you almost forget, then it hits you from behind like a train. Sometimes there is a trigger and sometimes there is not. Coping skills definitely help, but the train is still there, and it won’t be ignored. This time there was a trigger. Someone very close to me was sexually assaulted two weeks ago. When they started to tell me what happened, I just ran out of the room screaming. That was terrible of me. I should have been there for them when they were feeling traumatized. Instead I ran out of fear. I didn’t want to hear details, and now I feel guilty. I thought that when I got out of the cult I would be able to protect myself from abusers. I thought I could protect my friends and family. How could I have been so foolish? I am just one person against an entire culture of abusers. I’ve been physically ill most days since the event. I feel unmotivated, exhausted, distracted, I can’t catch a breath and my stomach hurts. I used to punch myself in the stomach each time after Ted took a hold of me, and I think that thinking about this most recent abuse is triggering that old pain. I feel weak, as if the day-to-day requires so much energy. My friend has a lawyer, detective, and counselor. She will most likely be okay. I am angry. I’m angry that I couldn’t protect her, I’m angry that this evil man found her. She didn’t deserve this, no one does. I’m jealous that she has a lawyer that will take her case when I never got the chance, and never will. That thought racks me with guilt. She deserves justice and this man deserves punishment. I hope they each get what they deserve.

It is interesting that September is suicide awareness month. Every day I see posts from a Facebook page about mental health; ways to cope with suicidal feelings and thoughts. These posts help me. By the age of 18 I was suicidal. I thought after I decided not to choose suicide I would never feel that way again. I haven’t felt like dying again until this week. I did not think about self-harm, I just felt like giving up. I had the thought of seeing no reason to live. I could see that scared Husband when I told him. I keep on living for my family. I keep on living for love, light, and kindness. I know I will get through this, I am not scared. I have just had a hopeless two weeks. I felt that the last 9 years I have done so much work to remove myself from that abuse. After this incident being so close to me, it all came back. I felt that I was right in the middle of it again. I saw no escape.

Tonight I did yoga for the first time in two weeks. Yoga helped a lot, but it wasn’t quite enough. I ran around the track, I just kept running until the tears were streaming down my face. I long to move forward, I will move forward. I have overcome so much, I will do it over and over again, because I am here. 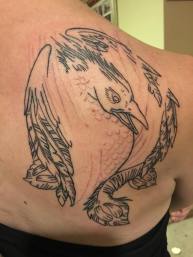